Wow! Our recent excursion to Scotland and the Shetland Islands in October did not disappoint. You can read my first post HERE. The next few posts and podcasts will be devoted to describing this amazing journey. This article is all about getting there. For folks who aren’t seasoned travelers it can be a bit daunting with all the different bookings and modes of transit.

You can listen to the podcast associated with this post HERE.

The trip required taxis, planes, trams, trains, ferries, and buses. The basic flow of things for us was Chicago to Dublin, Dublin to Edinburgh on Aer Lingus. Then Scotrail to Aberdeen to catch the ferry for a twelve hour ride to Lerwick in Shetland.

Step one! Get a passport. This can take some time – several weeks to months. Go down to your local post office. They can get you started.

The taxi was, of course, to get us from our house to the airport. We flew from Chicago O’Hare. It’s no secret that there are loads of people of Irish-descent in Chicago and so there are lots of flights to Dublin and on to the UK. We prefer Aer Lingus as they have good prices, frequent flights and they allow musical instruments in the passenger cabin. I’ve never been hassled ever and have seen lots of folks get on with us carrying guitars, accordion cases and the lot. Not sure what their official policy might be, but this is what I’ve observed.

The first flight is non-stop transatlantic to Dublin on a beautiful Airbus with great service and in-flight entertainment.

When you land in Dublin you’ll have a layover of some length depending on how you booked your connecting flight to Edinburgh. You’ll need Pounds Sterling the UK, but in Ireland they use Euros. Be sure to have some with you for the layover in case you want a little breakfast or a cleansing ale.

The connecting flight is on an over-wing prop plane. Now that’s flying! On this particular day in October we were experiencing what the gate agent described as “gale force” winds. To access the place you walk out on the tarmac with your carry-on luggage. Patt set her little rolly bag down for a moment while we were in line and – whoosh!! – a big wind sent it careening away and she in hot pursuit. Once on the plane I seriously considered getting out my Dramamine I’d brought along for the ferry as the plane was pitching to and fro and we weren’t even moving yet! 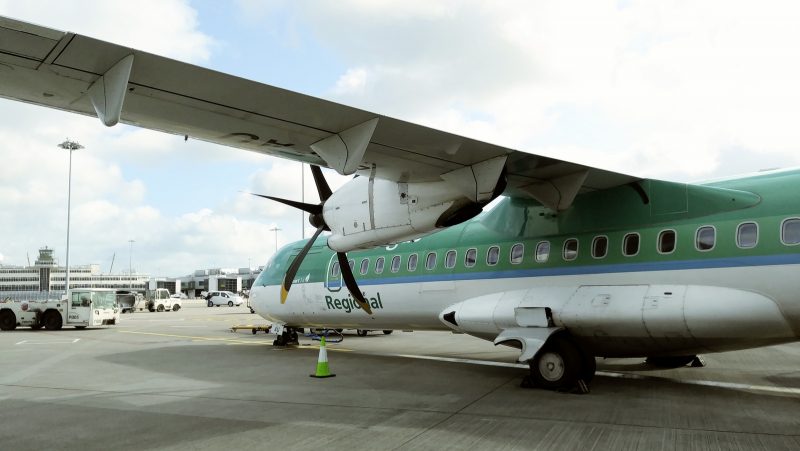 The ride and landing were both pretty turbulent, but we got to Edinburgh in one piece. The Edinburgh airport (EDI) is pretty far from the center of town so you’ll need to get there someway. There are numerous options. Here;s a little video I made of the landing. I can’t even keep the window of the plane on the screen!

Still it’s a great ride over the Irish Sea.

The next leg of the journey is getting from Edinburgh to the port of Aberdeen. This is a two & one-half hour train ride on ScotRail. If you’re ambitious you could actually get all the way there in a single day travel. Just head to Waverly Station in downtown Edinburgh and climb aboard. We like to spend an overnight in Edinburgh to allow our internal clocks to adjust. Plus, you might be able to find a good session at the Sandy Bells pub. We went there and closed the place that night.

A few words about ScotRail. It’s the national passenger railroad of Scotland. It’s a good ride and comfortable. Some of the rolling stock is a little dog-eared and that’s true of the trip to Aberdeen. busier commuter routes, like between Edinburgh and Glasgow, have sleek new trains.

Book your ScotRail tickets far in advance on-line at https://www.scotrail.co.uk/ as they are super cheap if purchase in advance. You can buy tix for specific trains or better yet get those that allow you to ride any train on that particular route on that specific day. You collect your tickets any time before the train departs at little kiosks. You’ll need the exact credit card you used when you book the ticket. Waverly is a big station so there are also ticket agents there who can assist. Take along some food and drink for the trip. There are snack available on the train, but their not the greatest. You can see the entire two & one-half hour ride on this video posted to my YouTube channel.

This is a beautiful ride, much of it along the coast. One the nice features is crossing the Tay River bridge – one of the longest rail bridges in Europe.

On arrival in Aberdeen you’ll see that the train station is attached to a large shopping mall. You can hang out there if you want, but if you’re lugging your suitcases, fiddles, etc. you might want a nicer place to park yourself while waiting for the ferry. We arrived about three hours before the ferry departure, but found a very cool coffee shop called Craftsmen Coffee and Ale House a few blocks from the ferry terminal. We had a little snack and I bought some coffee for later in the journey. 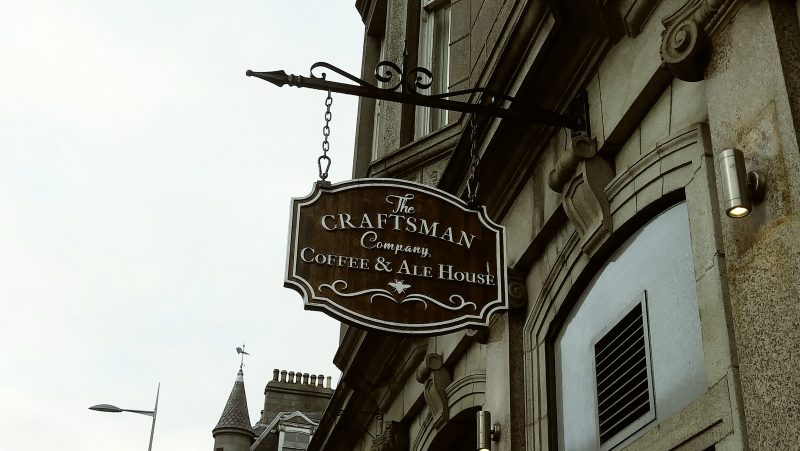 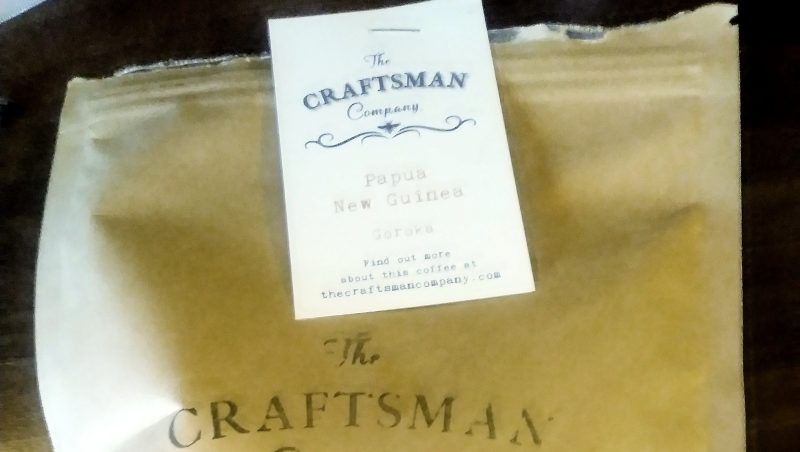 Finally it was time to board the great ship MV Hrossey operated by Northlink Ferry Lines. You make your way on foot from the coffeehouse to the ferry terminal. 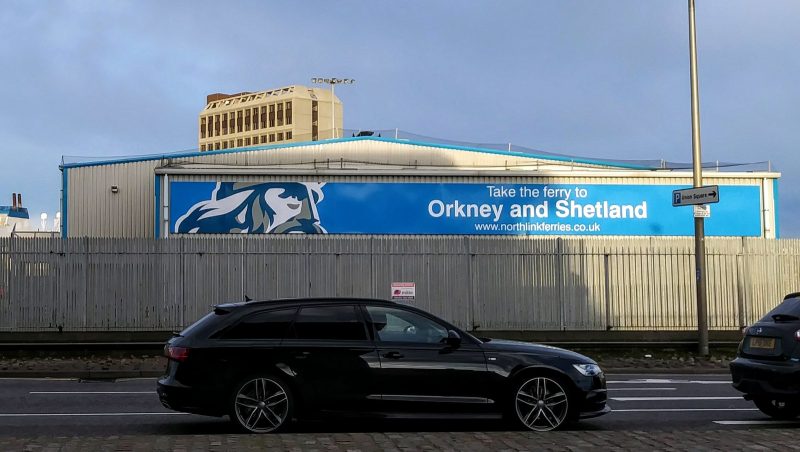 Read about this impressive vessel on wikipedia. This is no boat, but a tremendous ship with full-size tractor trailers in it’s hold along with a bunch of passenger cars. The accommodations (365 berths), bar and food are first-rate. You can sit up in the bar all night or in passenger chair, but it’s a 12 hour ride to Lerwick, so not so great for the seasoned citizens. Whether for the train or ferry in the UK be aware from “concession” pricing. This term is unfamiliar in the USA, but it means you get a discount for being a senior, disabled, etc. Book your ticket and cabin on-line at https://www.northlinkferries.co.uk/. 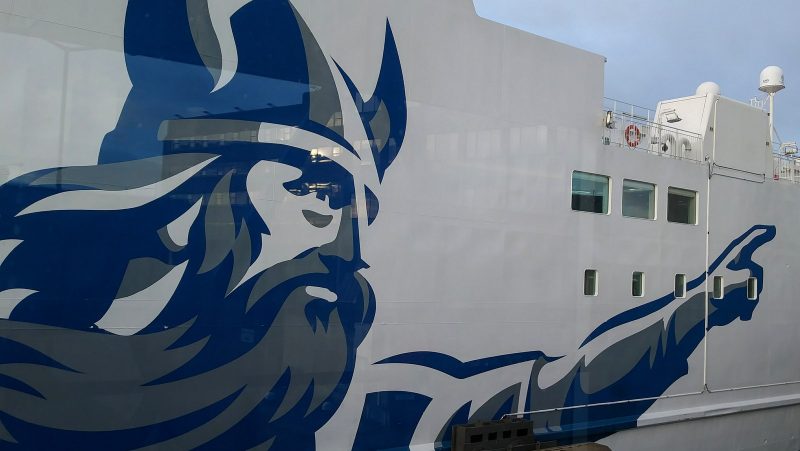 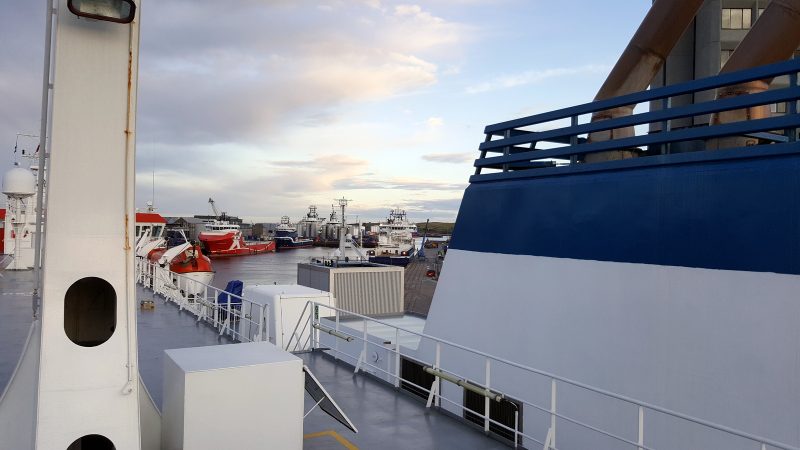 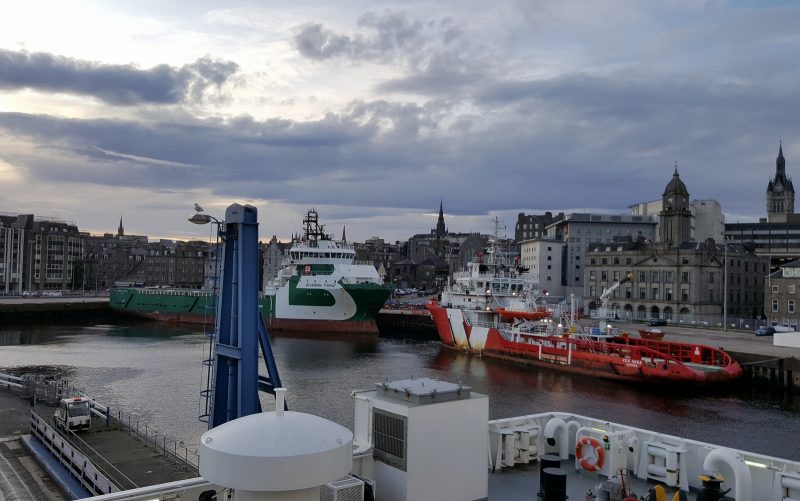 Here’s a 360 degree view of Aberdeen Harbour from the observation deck.

Seriously, we weren’t sure what to expect from the ferry, but it was more like a cruise ship with great service, immaculately clean, and very comfortable. You can fly to Shetland, but the ferry ride is much a part of the experience that I would never take a plane.

Music is permitted in the bar, but don’t run too late so as not too disturb the passengers in their berths on the deck below. The food in the cafeteria was excellent. I had this fish & chips, which was actually the best I have had in Scotland on four separate trips. 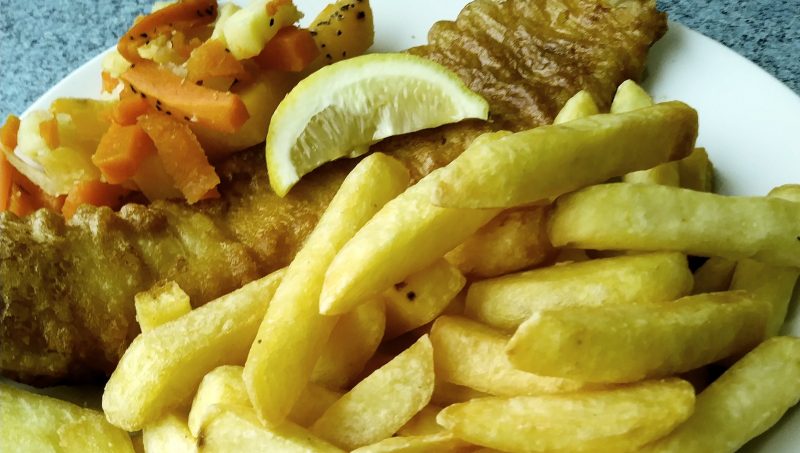 On the return trip from Lerwick while we were waiting in our cabin to depart there were giant sea otters playing next to the ship.

Next post will describe the Festival in detail. As a teaser, I can only say it was magical!

If after reading all this and listening to the podcasts you’d like to attend the 2020 Shetland Accordion and Fiddle Festival your first step is to mark your calendar for October 8 to 12, 2020. You can get updates at www.shetlandaccordionandfiddle.com. It also happens that there is another festival in Orkney, which starts on the Tuesday after the Shetland fest called The Reel Orkney Trad Fest, which will run from October 12 to 17, 2020. So you could get a two-fer, which is what we intend to do. I’ll post info for that fest at a  later time as more becomes available.