I’m starting a new “Wednesday Tune Fix” feature on the ol’ blog. Most Wednesdays I’ll put up a new tune for you to learn. It will include some background info, a video or video playlist from by YouTube Channel and the Dots (that’s what my Aussie friends call the notation – get with it!).

As played by George Helton. This is another instance of a tune known only by the name of a man who played it. Zack Wheat was an earlier fiddler of some renown who lived near Argyle, Missouri. 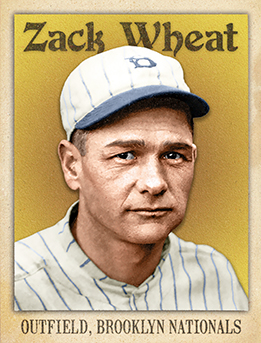 Now Zack Wheat is not that common a name, wouldn’t you agree?  It happens there was a Hall of Fame ballplayer for the Brooklyn from Hamilton in NW Missouri named Zack Wheat.  Don’t suspect there is connection, but Missouri has to hold the distinction of having two Zack Wheats!

This article will tell you more about Zack Wheat – the farmer, ballplayer and veteran than you can find anywhere.

Now on to the tune. You’ll find the dots on my DOTS page under Reels & Hoe-Downs. Here’s a video of it played unaccompanied in the Man Cave at Plunkett-Walden Mansion.

And here’s a performance video:

And lastly, if you want to just listen: