Permit me set the scene for you. You’re at Clifftop. It’s Saturday night after the contests have concluded. It’s been raining for a few days previous, but this hasn’t dampened your spirit and you’re looking to play and/or hear some great music. You slog past that row of porta-johns by the basketball court and lose a Birkenstock in the muck there. Undaunted, you soldier on.

As you get further into the wooded part of the campground some music over to the right among the trees catches your ear. Fiddle. Banjo. Synchronized. High energy. You wander toward it and there before you is festival fiddle legend Mark Campbell knee-to-knee with his protege Sean Franco on the banjo. People are gathered around listening intently and settle back for the best that this style of playing has to offer. That’s what you get with this new Bandcamp-only release by Mark & Sean.

How about a little sample before we go any further…

Mark Campbell needs little introduction to folks familiar with his generation of Upland South style fiddle players. He is a recognized master of this style and learned either directly or via recordings of source musicians from his native Virginia and the surrounding region. This is not an eclectic album of fiddle music. No Sir, Mark stays close to home and plays them as he learned them, but in his own flair, as we’d expect. Mark knows the way of the geezer fiddler and like me has become one himself!

For more about Mark I’d direct you to a very nice article by friend Rachel Krause that appeared on Old-Time Central oldtime-central.com/mark-c-campbell.

Sean Franco is both banjoist and fiddler, however, on this release it’s strictly Mark on fiddle and Sean playing banjo. Sean was mentored by Mark and you can tell he was paying close attention. He employs a variety of techniques for old-time banjo. I especially like what he does with Mark on Martha Campbell as it puts in mind of Lena Hughes of Missouri. He and Mark play together on these recording like they were related. Sean learned to play banjo from Mark and so his tracking of Mark’s fiddling is uncanny. He’s a seriously dedicated player and has thrown himself into the music with passion and energy. We need more like him!

The playing is tight and polished, but not stiff or careful – they are letting it hangout if you know what I mean. The recording was made in Jacksonville, FL, at the completion of a tour, which was an excellent opportunity to record. 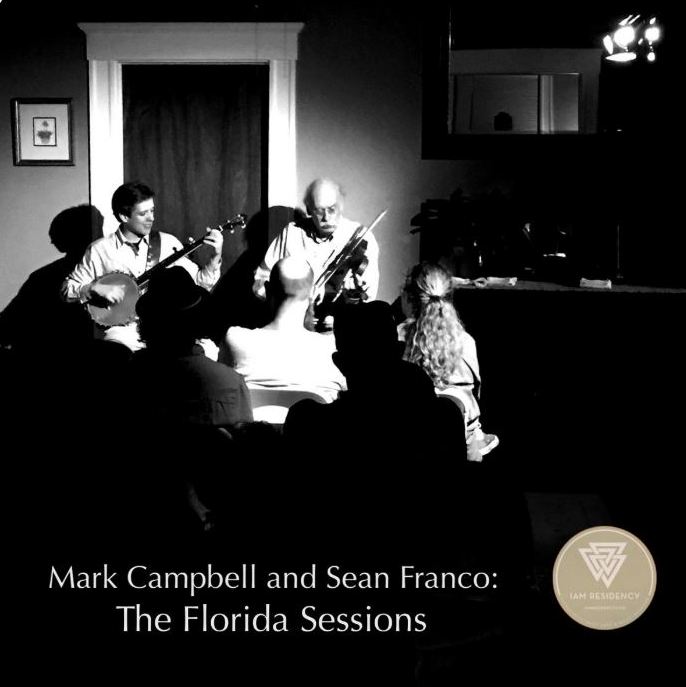 Here’s the program list and it’s a generous serving of 14 tunes:

For me there were some familiar tunes here, but a lot I had never heard. That might be my own limited knowledge of this repertoire shining through. Mark’s Martha Campbell is intriguing and a setting of tune I have never heard and is quite different from the northern Kentucky versions from Buddy Thomas or Roger Cooper.

Several of pieces would be quite accessible to less skilled players, that is they aren’t quite so notey, but still full-fledged renditions. Mary Wants a Lover stands out as such a piece.

British Field March, which is the only tune played without Sean on banjo is a haunting melody that stuck with me after only a couple of hearings. In the informative annotations written by Kerry Blech this tune is identified as a fife piece, so early 1800s(?) and was sourced from the well-known late Henry Reed.

I try to pick a tune to take away for my own from any review I write and since I’m partial to waltzes I chose Come Dearest The Daylight Is Gone. According to the album notes the tune is derived from Uncle Dave Macon, but originated as a piece performed by brass bands in the Civil War era. Here’s Uncle Dave’s take on it.

The original music is on the website of the Library of Congress and indicates the publication date was 1853. Download the PDF of the original sheet music HERE. You can find my transcription of Mark’s rendition at charliewalden.com/dots/waltzes.

My recommendation? Go get this album! You can download from Sean’s Bandcamp page at sfranco.bandcamp.com.