What is AQLF? Well my friends that stands for Association Québécoise des Loisirs Folkloriques or literally Quebec Association of Folk Leisure. It is the association in the Province of Quebec for the promotion and preservation of traditional music and dance. It was our pleasure this past April to be invited to perform at the monthly meeting of the AQLF in Quebec City (there are numerous chapters, by the way) by our friends Benoit & Gisele Hebert. Our musical buddy from Evanston, Jennifer Jeffries, came along, as well and played with us in the concert.

The trip started with a flight to Boston. Patt & I love going to Boston. Great food, history, scenery – what’s not to like. We jumped in the rental car and headed off to Quebec. We crossed the border at the little town of Derby, VT. Thought I would fill-up before heading into Canada so we pulled off the highway. Lo & behold there was a tiny little border crossing there right in the middle town that would allow passage into Stanstead, QC, Canada. I just pulled up to a little gate and a young woman in uniform bounded out and entered the booth. In a couple of minutes we were on our way into Quebec. My cursory observation is that pre-9/11 these two border towns were essentially one community. Sadly, there is now a hard border running right through the middle of two towns.

We continued up through some lovely farmland, past the tune title towns of Sherbrooke and Drummondville, and crossed the mighty St. Laurence River. By the way,  in French the St. Laurence is a “flueve”. It seems flueve is not exactly synonymous with river. It specifically refers to a river that dumps directly into the ocean. So the river at Trois Rivieres (Three Rivers) is a “riviere” as it is a tributary of the St. Laurence. That St. Laurence is huge and one helluva flueve!

This being mid-April, at home in Chicago it was already starting to hint around at being spring. Of course, it can still spit snow at Wrigley Field in April, which is why I usually won’t go near that frozen field of screams before June. It was still Winter by any measure in Quebec. There were massive piles of snow in all the store parking lots. Apparently they used to just dump the snow in the flueve, but that’s no longer permitted to they just pile it sky high everywhere. 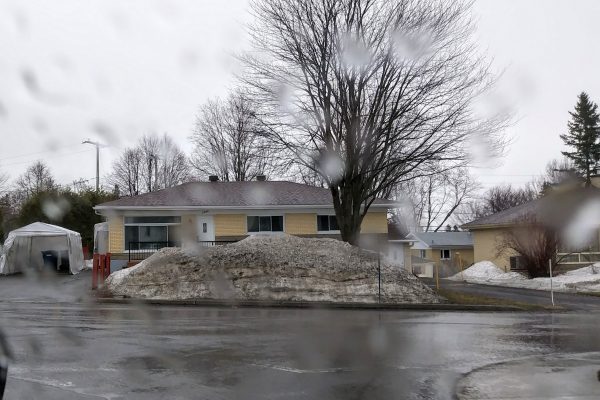 Another interested thing we noted is that everyone has these temporary garages that are like pop-up carports that extend from your garage out the street. These temporary structures make it so you don’t have to shovel your drive every day and can actually get your car out onto the street. We even saw someone had a similar cover that extended away from the front door, along their sidewalk and out the driveway – not unlike one of those hamster environments!

When we arrived at Benoit & Gisele’s Thursday evening we had a very nice evening jam session. Both Benoit and his daughter Martine are excellent fiddlers. Benoit’s playing in particular is really old-time – highly rhythmic and really fun to hear.

The next day was the AQLF-Quebec monthly meeting. The gathering is held upstairs in a hall that reminded me of an old American Legion or IOOF building. There was a bar serving beer, wine and snacks and capacity crowd was on-hand in the cozy venue.

As a fiddler I tend to focus on the music of other fiddlers. You really have to go to Quebec to get your head around how many accordionists there are. Someone cited an off-hand statistic that there are 10 to 1 accordions to violins in Quebec. This was certainly borne out on our visit to AQLF. The format of the meeting is that everyone gets to play two tunes. We heard accordionist after accordionist in succession for about two hours. It was incredible! Many players were there, old, young and in-between. There was also an harmonicist who could get around on those notey Quebecois tunes with ease. It was heartening to see such intergenerational support for this traditional music. Be sure to check out the gallery of pics of all these incredible musicians at http://blog.charliewalden.com/wp/aqlf-quebec-musicians-photo-gallery/

By the way, if you’re ever asked to perform at such an occasion, be sure to inquire in advance as to where you are in the program. We had ample opportunity to consume red wine and “Molson Ice” sufficient to slightly impair our normally stellar musical abilities. Oh well, a few fluffed notes here there. Who’ll notice, right? At the end of our program were received in a line of people wishing us “felicitations”. Everyone was really gracious.

Here’s our entire concert for your viewing and listening pleasure:

This was followed by still more music. I really enjoyed seeing Jean Denis “Ti-Gars” Plante, who played the piano for many of the musicians and also took a turn at the fiddle. Ti-Gars has a great sense of humor, besides being so talented. He took me school by playing a even more interesting version of Ragtime Annie than I had performed in the concert! I’m going to study his rendition and steal a few of his ideas.

I also got to play some tunes with a player I admire greatly, Jaclyn Guerrette. I consider him one of the finest fiddlers in all Quebec. He knows so many great tunes and plays them with real flair.  We also enjoyed seeing Mr. Jean Paul Gaummond, who is a top-flight accordionist.

We retraced our path back to the US of A on Sunday and had two more evenings in Boston staying just a block from Boston Common. Boston Common is an amazing green space right in the middle of the city with a pond in the center, the famous swan boats and more established in 1634 and is America’s oldest park. My mother was a Boston native so we had a copy of Make Way for Ducklings around when we were kids and I continued this tradition with our kiddos and grand-kiddo. The ducklings are immortalized with little brass statuettes in the park.

Not far from the Common you can get the most insanely delicious breakfast sandwich at Mike & Patty’s. This place is on a corner and is tiny, like ya-gotta-go-outside-to-change-your-mind tiny.  Coffee is great, but the breakfast sandwich is other worldly as it’s served on a made fresh daily English muffin. Forgot about those crappy ones you get in the grocery store. You ain’t never had an English muffin like this.

We stopped off at our favorite Boston seafood place, the Chart House. It’s located on Long Wharf in an old brick warehouse built in 1763 that was once John Hancock’s counting house. We sat in the bar to be conveniently located near the watering station. I splurged and had a whole lobster. When in Rome, right? Let me tell you, if the server ever offers to crack the beast for you take him up on it. nearly ripped my hands to pieces getting the meat out of that giant bug! It was worth it, though. I washed it all down with a couple of steins of Boston’s own Samuel Adams Lager.

After all that excitement we returned home again to rest before our next adventure.

Looking for music to some of your favorite Possum fiddle tunes? Visit https://charliewalden.com/dots/.